Bristol is bidding to bring the international Wikimania conference to the city in 2013. Wikimania is an annual event attended by influential speakers, writers and users of wiki projects such as Wikipedia. Run by the Wikimedia Foundation, if Bristol wins the bid to host the the week-long event, it could welcome the likes of Stephen Fry, Cory Doctorow, Jimmy Wales, Clay Shirky, and Tim Berners-Lee.

Bristol’s bid was submitted on Friday and now there is an online campaign growing to gather support. The city is up against competition across the world, including Hong Kong and Surakarta. Rival bids closer to home are London and Naples, Italy. Bristol recently welcomed Wikipedia founder Jimmy Wales, and also hosts the annual Festival of Ideas which attracts known writers and thinkers. Bristol’s bid promises that if successful, it will:

* Create a wide, generous and secure platform for the active involvement of community groups

* Build a bridge to the non-Wiki community (the Wikiless), inspire a new generation of volunteers

* Create a place and space where working relationships can strive, thrive and develop

This year’s Wikimania will take place in July in Washington DC.

To find out more visit the Bristol bid wiki.

Bristol and Glasgow have emerged as the “super cities” that will lead the rebalancing of British manufacturing towards hi-tech production and renewable energy respectively, HSBC predicts. A report entitled The Future of Business 2011 from HSBC Commercial Banking says that Made in Britain is making a comeback. It confidently predicts a renaissance of Britain’s manufacturing heyday and a return to the world buying goods that have been manufactured in Britain, but with a 21st century slant.

There is a long way to go, though – a decade ago manufacturing made up just under a fifth of the economy but that figure has fallen to an eighth. Bristol and Glasgow join the super-cities of the coming decade identified by HSBC two years ago: Newcastle, London, Leeds, Brighton and Liverpool. The report says there has been a resurgence in manufacturing, especially in the Midlands and the north-east, reshaping traditional skills and crafts and making the UK known for prototyping, plastronics and advanced composites.

“Out of recessions come new trends and this report crystallises how adaptable entrepreneurs and small businesses are shaping a new business landscape that British business is set to follow,” said Jacques-Emmanuel Blanchet, head of HSBC Commercial Banking UK. “Change is definitely on the cards. Sixty-two per cent of business leaders believe that Britain will increasingly stand for ‘innovation and entrepreneurship’ compared with 46% previously. It is evident that in a decade’s time we will have seen a redrawing of the industrial map of the UK.”

Business leaders see digital communications (68%), biotechnology (65%) and low-carbon industries (60%) as providing the best prospects for growth over the coming decade. Lee Hopley, chief economist at the EEF manufacturing organisation, noted that some of the new technologies build on traditional industries – for example, composites has links with aerospace and low-carbon transport such as electric or hybrid cars will build on the strength of the conventional car industry.

She added: “Since the start of the recovery, manufacturing has had a pretty strong export performance. A lot of the groundwork from manufacturers started well before the recession – they looked at where the new growth opportunities were going to be … We’re looking at an economy where we rely less on the consumer and government spending.” The HSBC report highlights Bristol, with its tradition of hi-tech production within aerospace and information and communications technology, as a budding centre of advanced manufacturing. “New world leading research centres into materials science and pioneering research at Bristol University will only add to the city’s repertoire,” said Jim Whyte of The Future Laboratory, which compiled the report for HSBC.

Glasgow is forecast to becoming a leading international force in renewable energy, with Strathclyde University and the Sustainable Glasgow consortium leading the way. Other renewable energy centres will be in Orkney, Humber, North Wales and Cornwall while Durham, Cambridge, London and Swansea are key cities for plastronics and Oxfordshire for space industries. “This report’s findings are bright for the future of the British economy and especially bright for British manufacturing,” said business secretary Vince Cable. “We want to see technological advances generate new growth and new jobs across the country.” He said the government was creating 10 Technology Innovation Centres to draw on leading edge research and investing £1.4bn from the regional growth fund in companies with ambitious expansion plans. However, so far the banks have missed targets set by the government for lending to small and medium-sized businesses.

Jimmy Wales: Co-founder of Wikipedia was speaking in Bristol yesterday

The co-founder of Wikipedia has said that he expects China to eventually abandon its internet censorship policies, in a speech in Bristol yesterday.

At the Victoria Rooms in the city centre, Jimmy Wales added that he was “proud” of Google for pulling out of China in protest of its policies of blocking “dangerous” information online.

Mr Wales was in the city to mark the 10th anniversary of the online encyclopaedia on Saturday. Wikipedia is now the fith largest website in the world, attracting more than 400million unique visitors a month with just 50 full-time staff members.

Around 300 people were at the Victoria Rooms to hear Mr Wales say that growth in the amount of English-language content had slowed, but that he was now focussing on increasing quality over quantity. He said he wanted Wikipedia to be of better quality than the Encyclopaedia Brittanica, and called on more academics from a broader range of people to contribute to the site.

He also attacked Apple for its stance over ‘app’ development and the need to gain permission from the computer giant to distribute apps and their coding.

Speaking to Bristol24-7 after the event, Mr Wales confirmed he intended to keep Wikipedia as a free service for the world. “We are a charity with a mission to bring a free encyclopedia to every single person on the planet, and we aren’t deviating from that goal.”

Read the full interview…
1) What does the 10th anniversary of Wkipedia actually mean for you? Did you envisage how the project would have developed to this point when you started?

For me, the 10th anniversary is a celebration of our community, the thousands and thousands of people who have poured so much heart and mind into building this amazing resource that we all enjoy.

It’s also a celebration of what is to come: the building of Wikipedia in the languages of the developing world. I envisioned some of it. But there’s a lot that was surprising to me. One example: while Wikipedia was always envisioned to be global in scope, I never really grasped what that meant. I’ve learned so much about the world by traveling and meeting Wikipedia volunteers everywhere.

2) Why have you chosen Bristol as one of the locations to celebrate this event?

I was intrigued by the concept of a “Festival of Ideas” and we have a strong relationship with the city grounded in a meeting that we held in the city a few months ago to talk about fund raising with our local chapters. Additionally, we have a strong local community in Bristol and Steve Virgin, in particular, from the board of Wikimedia UK, was quite
instrumental in organizing everything for my visit.

3) Five years ago, as a news sub-editor, I was advised not to trust what was written in Wikipedia when checking facts in stories. Is this trust now unjustified and why?

My view is that this is not an appropriate use of Wikipedia, and that what we should use Wikipedia for, as journalists, is to discover what are the good questions to ask. What are the open questions on any topic? Let’s look at those.

4) Do you still worry and wake up in the night, wondering what has been added to Wikipedia?

No, we have a very strong community and they do an amazing job of monitoring.

5) Is Wikipedia as authoritative now as the Encyclopaedia Britannica etc? What areas need to be improved on?

In some areas we are, and in some areas we are not. My belief is that all areas of Wikipedia are subject to improvement – we are never satisfied with the level of quality. Academic studies have shown our quality to be similar to that of traditional encyclopedias, but I believe we can surpass them significantly.

6) Do you know what proportion of contributions come from learned experts… or do you think this even matters?

I don’t know the percentage, but I think it very much matters. It’s really important that people with expert knowledge continue to add information to Wikipedia.

7) I read that you are irritated by the perceived connection between Wikipedia and Wikileaks, but what is your position on the Wikileaks controversy of the last few months? Was Wikileaks right to publish the secret documents from the US government that it obtained?

Wikipedia has nothing to do with Wikileaks whatsoever. My opinion on it beyond that isn’t really important.

Looking at the bigger picture, how does the Wikileaks controversy, the Wikipedia project (and your refusal to bow to Chinese demands to sensor ‘sensitive’ information) and the general explosion in the public use of the internet to share information change the balance of power between the individual, and governmental and corporate organisations?

Obviously the Internet is a tool for massive empowerment of the individual. Everyone can now participate in the public dialog, and those who are thoughtful can gain a wide audience.

9) Do you think Wikipedia can remain a ‘free’ service supported by donations? And do you think information, as a rule, should be freely available?

I think that Wikipedia will remain free, yes. We are a charity with a mission to bring a free encyclopedia to every single person on the planet, and we aren’t deviating from that goal.

10) What is your core belief of Wikipedia, the one you tell world leaders such as Russian president Dimitry Medvedev recently? How did Medvedev react – and what is the overall attitude (if there is one) of world leaders to the project?

I only met him briefly, but my experience with meeting world leaders has been a keen interest in Wikipedia and a general excitement about how it is a positive force in the world. That is to say, they react like human beings.

11) What next? How does the Wikipedia and overall Wikimedia project go forward?

We are focusing increasingly on the languages of the developing world, and in particular we are opening our first office outside the United States this year, in India. This small office is our first step to try to directly support the community in India with the specific local issues that they face in building the Indian language versions of Wikipedia.

12) As a small, independent online news outlet that is going up against the traditional media big boys, what advice would you offer me?

Engage your community in innovative ways. Not just comment boards at the bottom of the articles, but serious participation in the creation of the work. 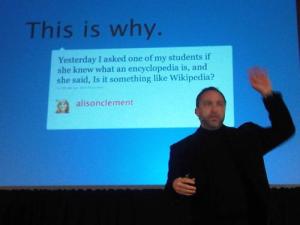 VIRGIN ON MEDIA
Create a free website or blog at WordPress.com.